Keep up-to-date with the awards we have received.

On Friday 23rd of March we joined  in with Sport Relief 2018, this is a great way to raise money for a fantastic charity that fund projects abroad and here in the UK. Sport Relief is a fantastic chance to come together and feel like you’re part of something big.
We asked pupils and staff to get sporty and come to school in their sports gear, to help raise money.

We had  a non - school uniform day in remembrance of Mrs Janet Evans, our kitchen assistant / Friends of Hamp bingo helper.
We  requested donation for ‘Breakthough for Cancer’.
We raised a massive £349.26.
Janet’s family was grateful for all your kind thoughts.
Thank you all very much.

By popping on your pullovers for Christmas jumper Day this year, you’ve helped make the world better in a sweater.
we raised £140.70 .
Many thanks.

Friday 17th November we had non-school uniform. This year’s theme was spots, the spottier the better! We raised £282.50.
Thank you!

On the morning of Thursday 12th October, the children and staff visited Holy Trinity Church for our annual Harvest Festival.

This year, we collected non-perishable items such as, UHT milk, rice, sugar, bottles of squashes etc for the Bridgwater Food Bank.  We had a brilliant response.

Thank you for your continued support,

On Friday 15th September 2017 our school participate once more in the Roald Dahl dressing up day. our school was taken over by many characters from Roald Dahl books including Oompa-Loompas, Willy Wonkas, Matildas, BFGs and Charlie Buckets!

We  raised an amazing £253.68 this will go towards the Roald Dahl’s Marvellous Children’s charity. This charity supports specialist children’s nurses and other marvellous things like providing support for families living in poverty while caring for seriously ill children.

Our school charity for 2014-2015 is Children’s hospice South West.   This charity’s aim is to build precious memories for families whose children are living with life-limiting or life-threatening conditions.

We aim to raise over £500 for this charity throughout the year. 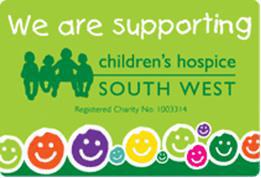 We aim to raise over £500 this year for this worthy cause.

In the 2012/2013 academic year our school charity of choice was Brainwave.  Brainwave is a local charity based in Bridgwater which aims to provide support for children and their families.  We managed to raise £500 for Brainwave by having cake sales, car washes and many other exciting activities.  Well done!